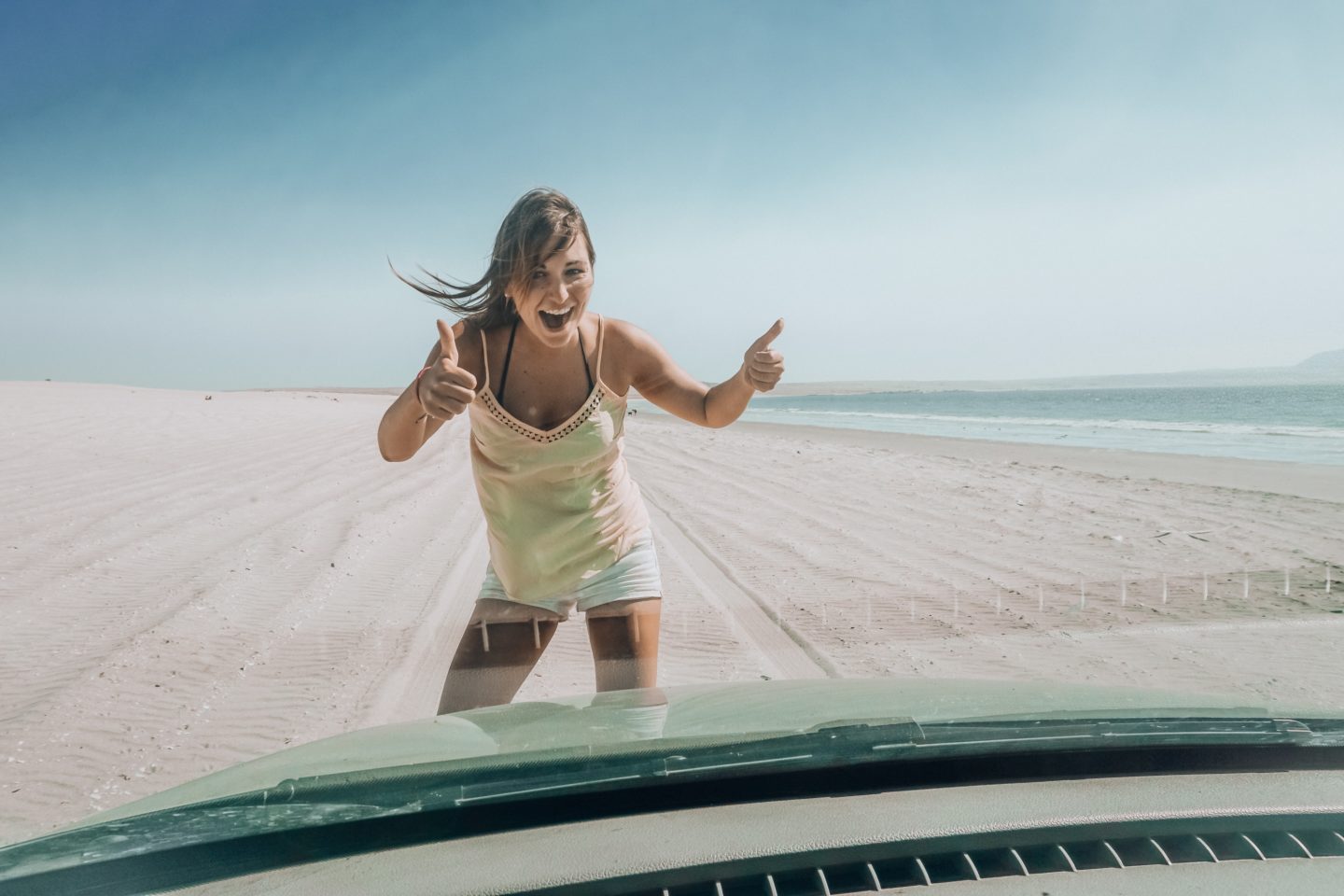 Traveling has become THE thing to do in recent years and it’s almost pretty much impossible not to know someone who has done it, whether that be with friends or alone. Whenever I went on a trip by myself, people would ask something along the lines of ‘but aren’t you scared to travel solo as a girl?’, ‘what if something happens?’ or ‘is it even safe for a girl to travel alone?’

When I went on my first solo trip at 19, all these questions were obviously on my mind as well but you learn rather quickly that new places are not nearly as scary as they might have been in your/other peoples’ mind and 97-99% of the people you meet abroad are awesome and friendly and are the reason for why you will love your trip.

That being said, stupid shit still happens all the time, no matter if you’re walking down the street in Munich or somewhere in South America. Just a couple of weeks ago, I was harshly reminded of that fact when my phone got stolen in Bali because I honestly got too comfortable and forgot about following some of the following advice myself.

That’s exactly why I put together this ultimate guide to solo female travel that includes everything (or let’s say most of the things) you should pay attention to so that you’re not in the same dumb situation (or something worse) that I found myself in a couple of weeks ago.

Be Mindful With Your Valuables

I put this as the number one piece of advice because I just got reminded of why this is so important. For some of you out there, this one is a no brainer but when you grow up in Germany (or some other places that spoil you by being generally really safe) you sometimes forget about this one which can result in finding yourself in Bali with your phone stolen (yup, big thank you to myself on this note). This can include anything from leaving your phone on the table while you’re eating to walking around with an ‘open’ bag pack/purse that makes it easy for someone to reach in when you’re not paying attention. It also means not to put your phone into one of the little boxes on your scooter because it happens A LOT that someone on a scooter drives by and just grabs your phone (or your purse for that matter).

TIPP: PLEASE make sure that all your photos and important files are backed up on the cloud/google drive or just somewhere and make it a habit to check that they are being uploaded regularly. There are only a few things that are more annoying/upsetting than, on top of losing your phone, also losing all your photos.

Don’t Be An Idiot and Show Off Your Valuables

Nowadays, we all travel with a fair amount of valuables/ expensive pieces of equipment that we really don’t want to lose. Depending on where you’re traveling to, the risks of getting robbed/things stolen vary greatly which is why you should always try to minimize the risk of this happening. So don’t leave your computer/camera in your hostel dorm/hotel room while you’re out and about. Also, when renting a car, don’t have your phone/camera on the driver’s seat or anywhere that’s visible for people driving by (it doesn’t matter if you’re in the car itself or if it’s parked). In some places, it’s also a very good idea not to walk around with a (nice) watch on your wrist/jewelry or anything that you honestly don’t need.

What usually helps is simply looking around and adapting to what your surroundings look like. Like I said earlier, 99% of people are awesome and happy about tourists but douchebags do exist everywhere.

Just Don’t Be An Idiot in General/Be mindful

This is pretty much self-explanatory and pretty much entails that you should always educate yourself about local customs before heading to a place. Read up on drinking habits, the proper way to dress (this one is usually more important for girls and can get uncomfortable), haggling or the proper way of dealing with problems in a specific country.

Catcalling is unfortunately still common in many places

Don’t Bring Anything Important When You Go Out

This is a big one for us girl but one that could potentially put you in an unwanted situation. Literally nobody needs to go out with a backpack/purse that includes everything you could need for a week of hiking (but I still see people doing that). Especially as girls, we like to bring a purse at night that includes the ‘basics’. If you want to do that, just be aware of having it (especially during the later hours or when you go home). I made it a habit to leave it at home and just bring my phone and cash, just because I feel better about not having to worry about it. Whatever you do want to bring, just ask yourself if you really need it and be aware of your surroundings because unfortunately, it’s very common to have your purse snatched in a matter of one second (at having it snatched is one of the unscary scenarios).

Most travelers I met that ever got robbed, got robbed at night (yup, definitely including myself in this as well). Many places, especially the ones that attract more and more tourists nowadays, make you feel really safe, so most of us find ourselves being reassured that nothing’s gonna happen. Especially if you’re on a budget, spending those 2-5€ for a cab instead of walking for 10 minutes sounds like a very tempting idea. I’m not saying that I haven’t been like that as well (although it really sounds somewhat stupid/silly as I’m writing this). On top of that, friends will most likely reassure you that it’s safe to walk because it’s two or three of you so you should be safe. Whenever that happens, just remind yourself that, for the off-chance of something really happening, it doesn’t matter if it’s 2 or 5 of you because you (hopefully) won’t argue or try to fight off someone holding a weapon. If you ever find yourself in a situation in which someone threatens you with a knife/any weapon for your phone/money/camera, just give it to them because nothing you can buy is worth your health and wellbeing.

So, to stop the rambling, just take a taxi/tuck tuck/uber/grab home.

When In Big Cities, Don’t Just Walk Around Aimlessly Without Knowing What Neighborhood You’re In

Also a no brainer when you think about it but it happens more often than I would like to admit. I love wandering around aimlessly because sometimes, that’s how you find the coolest and most hidden little spaces that no one else knows. I’m not saying ‘don’t do it’, but I am saying make sure you know what areas to avoid in a new city and make sure to stay far enough from them. Talk to hotel/hostel staff about recommendations, check online or sometimes just trust your gut feeling. I found myself wandering around in Valparaiso, Chile without really thinking about it too much until a cab driver stopped and told me to get in the car right now because it was stupidly dangerous for me to walk around #thankyouagainstranger.

Speak Up or Walk Away From Sketchy Situations

Getting ripped off and having to pay a lot more for most things is something every traveler surely knows. It happens to all of us and at least for my part, I think it’s ok if we pay a little more than locals, as long as it’s still reasonable. There are however moments in which you clearly know that something isn’t right. The first couple of times that happened to me, I was either too shy to say anything or didn’t want to come across as rude and usually ended up getting seriously ripped off (by for example getting dropped off at a ‘bus station’ all the way outside of town so that me and only other tourists/travelers had to get an extra taxi for like 20$ a person). So, whenever your gut feeling tells you that something seems weird, just speak up or ask questions. You don’t have to be rude about it either (I actually learned that being extra friendly about it is oftentimes way more effective) but SAY SOMETHING. Depending on the situations, of course, it’s sometimes also better to just remove yourself from certain situations but you will have to make that call yourself.

Aaaand this is it. Most of this advice is pretty basic but it can honestly come a long way in some situations. Whatever happens though, just do keep in mind that most people will help you out no matter what happens so go out there, enjoy and make friends 🙂